Maria Ressa is the CEO of Rappler.com, an online news organization in the Philippines. Maria’s courage and work on disinformation and ‘fake news’ culminated in her being awarded the 2021 Nobel Peace Prize in recognition of her “efforts to safeguard freedom of expression, which is a precondition for democracy and lasting peace.” Her numerous awards include being named Time’s 2018 Person of the Year and listed among its 100 Most Influential People of 2019.

Maria advises organizations and corporations on corporate governance, values, and strategy. Her experience as a journalist and an entrepreneur in the digital world makes her a sought-after keynote speaker and panelist.

A journalist for over 36 years, Maria has had 10 arrest warrants filed against her related to exposing the Duterte government’s corrupt practices and was convicted of cyber-libel in June. She is out on bail pending her appeal but true to form, Ressa, vows to keep fighting.

Maria was featured in the 2020 documentary “A Thousand Cuts,” which profiles her fearless reporting on the abuses of Duterte’s presidency, while also illustrating social media’s capacity to deceive and entrench political power.

Her newest book, How to Stand Up to a Dictator, (translated into 15 languages) now available in the U.K. through Penguin Books ,

and available worldwide via Harper Collins.

Maria now travels the world speaking to organizations of all kinds on freedom of the press, democracy, and corporate governance. 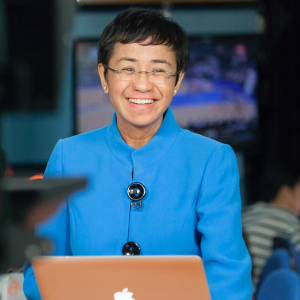 Corporate Governance: How Companies Thrive with Transparency
Fighting Back with Data
Technology's Impact on Democracy
The crowd was mesmerized. Speechless, until one guest asked how she had hope. Maria’s energy and positivity allows her to deliver the message we all so desperately need to hear in a way we can truly understand it and reflect on it. Maria was warm and open, curious about our group and completely engaging. Only we as individuals can solve the problem of facts: around our dinner tables and in our communities, by listening to people firsthand."
Darla C. StuckeyPresident & CEO - (Society for Corporate Governance)
"On behalf of Mediacorp, we would like to thank you for participating in our CNA Leadership Summit 2022: Women Inspiring Change on International Women’s Day, Tuesday, 8 March. It was our privilege to have you as our speaker in our keynote fireside chat session.  Your candid insight on journalism’s advocacy, viral disinformation, women’s empowerment and holding on to ideals are certainly insightful and inspiring at the Summit. We hope you enjoyed the session as much as we did."
CJ Young, LeadCommercial Engagement, News Group (Mediacorp Pte Ltd) (Virtual)
"Many Thanks for your wonderful speech on May 29th in the 2022 Asia Journalism Forum. Your speech impressed the audience. Your voice is a bell tolling for the coming tremendous crisis of truth and trust which are bases of democracy. And you won't be alone with the many allies standing by you, including us."
Eve ChiuCEO, The Foundation for Excellent Journalism Award
"Maria was one of the major reason why this congress became such a success. Her engagement, communication skills and her empathy and openness toward other participant is rare. She is a queen."
Veslemøy ØstremProgram Committee - (World Expression Forum)
"Her remarks were insightful, engaging and inspiring. She explained in a lively and interesting way a very complex and sophisticated story, drawing on current events and data. A real feast for the brain and the heart."
Nathalie Des RosiersPrincipal - Massey College, University of Toronto (Camden Conference)
"Thank you for joining us as a plenary speaker at the 2021 Skoll World Forum and for your thoughtful preparation in developing your keynote. The Closing Plenary aired this morning to a community of 1000+ and the admiration for you and your work was off the charts. There were more than 100 comments from attendees during your segment – I won’t post them all, but these encapsulate the sentiments:
Jessica FleutiDirector & Curator, Convenings (Skoll Foundation)
"Maria was a delight to work with and a stand-out speaker at the conference. Her speaking style is engaging and her story is compelling - and frightening. Thank goodness she injects humor from time to time! Our survey results are not all in yet, but I know from verbal feedback that she was the crowd favorite"
Charlotte SingletonChair, Program Committee (Camden Conference)
"Maria’s interview was my favorite during the festival. We have received great feedback about it. She gave us a good range of both very specific examples when answering questions, and context by connecting those to the bigger, global picture-- esp on freedom of the press as it relates to our predominantly American audience."
Katie CassettaPM (Aspen Ideas Festival) (Virtual)
Previous
Next

Click the image to view our speaker's featured talks

Fighting Back with Data